Our adventure began the morning of September 7, 2012 when we left our home in Sparta, Missouri. Our destination was the Salisbury Concours d’Elegance in Des Moines, Iowa having been invited to show our 1930 Studebaker President FE 7-passenger State sedan in the featured class of studebakers. Our arrival at the host hotel in the early afternoon coincided with anticipated rain showers which ended quickly. Not to worry—we were leaving the car in the trailer until Sunday morning. Friday evening, Salisbury House hosts a fundraiser known as “The Gatsby Gala” and participants are encouraged to dress in period attire. The next morning began with a driver’s meeting at the Living History Farms information center. An all-day driving tour with a lunch stop was on the itinerary. Tom and Lyn Keegan of Kansas City invited us to ride with them in their 1939 Cadillac V-16 5-passenger formal sedan.

Our first stop was at Skunk River Restorations in Ames, Iowa where we saw many British sports cars in various stages of restoration. The workmanship at this shop was superb. Next was lunch in Williams catered by Hickory Park followed by a visit to the Hemken Collection, just a few steps away. This collection dates to 1958 when Daryl Hemken began collecting cars. His son Peter was our host of this all-original collection of cars featuring convertibles only from 1947 and 1948 along with other cars from the 1950s and ‘60s.

The return route to the hotel took us through the Iowa countryside (a little more than planned because we were “driving by committee” before getting back on course). Saturday evening was the exhibitor’s banquet at the Willis Auto Campus where we caught up with old friends and others from the tour.

It was an early morning Sunday since we had to have the car on the field by 8:15. The Studebaker decided to be temperamental and would not start. A little coaxing did the trick and we arrived at Salisbury House with a few minutes to spare. This concours uses “French judging rules” with three judges per class. A chief judge guides the team as they review each entry for elegance and beauty. This subjective evaluation of design, craftsmanship and physical condition is balanced with an authenticity review used as a tiebreaker.

The grounds of Salisbury House made for a beautiful backdrop for the cars gathered at the concours and the grounds have a history as rich as the
cars displayed. Carl Weeks was a man of remarkable accomplishments. He was a pioneer in the cosmetics industry and built a fortune on the success of his company, the Armand Cosmetics Company. He once wrote, “If you can dream it, you can build it” and he and his wife Edith did just that. During a visit to Salisbury, England in 1921, they came upon “The King’s House”, a manor used by British royalty dating to the 13th Century. Its beauty and majesty served as the model for their own home. In 1923, ground broke for their 28,000-square foot, 42-room, four-story home and five years later, the project was finished. The Weeks lived at Salisbury House until 1953. Today, Salisbury House and Gardens serve as a museum, a cultural and educational resource, and as a center for professional and social events.

During concours Sunday, we enjoyed touring the grounds as well as chatting with spectators who had a genuine interest in the cars displayed. We were surprised and honored when we were called to the podium to receive a first-place trophy in the Studebaker class. This was the 12th year of the concours which benefits awareness and preservation of Salisbury House. For more information, visit www.salisburyhouse.org.

Click Here to View the November Edition of the Bulletin 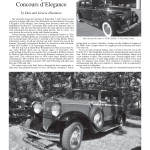 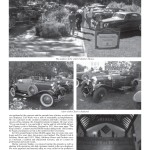