With a little grace, road trip may yet go on
By Josh Hafner

AMES, Ia. — John Nikas is stranded and living in an auto repair garage in Iowa.

He’d rather be on the road, his real home for most of the past year, where for about 20 hours a day he’s driven across the country in “Grace,” a rusted British roadster a friend bought on eBay. Nikas should be touring America and visiting cancer-stricken kids who — with the rev of an engine and the push of a gas pedal — can take a ride and forget their worries for a while.

For the first time in their travels, Grace broke down and now needs her pistons repaired. And Nikas is stuck in Ames, worried that he won’t keep his planned visits to give sick youngsters a ride in his 1953 Austin-Healey 100.

On Oct. 11, Grace sputtered into Skunk River Restorations on the south side of Ames, where she is stuck until her engine can be repaired.

Since then, Nikas, 42, has encountered a car community of central Iowans rallying to get him back on the road and headed to Alaska, the last leg of his trip. About 40 folks from Ames, Des Moines, Urbandale, Altoona and places in between are logging long days and late nights to fix Grace’s engine. In the process, they’re building a move­ment inspired by the car to serve cancer-affected families in Iowa.

“It’s miraculous serendipity,” Nikas said. “Whenever we’ve needed someone to pitch in, someones shown up. Whenever you can’t devote more time, someone shows up to lend a hand. Everything we’ve needed has been provided for.” At present, Grace has two deteriorating pistons. Nikas contacted Steve Myers of Skunk River Restorations, a full service auto shop that had worked on Grace in September. After the minor repairs, Nikas and Grace headed to New Mexico and then to North Carolina. During that 4,800-mile trip, Grace’s pistons began failing.

“Two pistons deteriorating — any other car, any other day, it wouldn’t even start. Yet this continued halfway across the country,” said Randy Anderson, an Urbandale car buff. “If the car is truly loved and honored, it will get you there.” So for another week Grace is sprawled in parts across Skunk River’s space. And Nikas worries he’ll not be able to make it to Alaska on schedule. Drive Away Cancer, the nonprofit movement inspired by Nikas and Grace, launched from Southern California last year. When a friend was diagnosed with multiple myeloma, Nikas decided to drive to the East Coast and back in Grace, now an inspiration to those fighting cancer and rolling memorial to the disease’s victims.

He gave Grace her name and set off. Everywhere from gas stations to car shows, he met people affected by the disease, many who took a Sharpie to Grace and left the name of a loved one in honor or memory. Grace now sports around 13,000 names, by Nikas’ count, covering every panel and edge of the car. As long as Grace carries those names forward, Nikas said, people feel they can, too.

In April, Grace set on a second trip, traveling to as many states and homes as possible to put a smile on the face of kids affected by cancer. “People think the magic is in Grace,” Nikas said. “The magic is in showing up. Kids have no idea what the car is. We’re showing up for them.”

Tim Sheriff, a Volkswagen enthusiast from Altoona, met Graceand Nikas at a Des Moines road rally in September. He said Grace showing up meant a ride for his niece Jena, 14, who has Rett syndrome.

“We said, ‘She doesn’t have cancer; It’s a neurological disorder,’ ” Sheriff

recalled. Nikas didn’t care. He showed up on a Sunday afternoon and drove Jena around for four hours. Inspired by Grace and Nikas’ journey, Sheriff and some friends have decided start a version of Drive Away Cancer in Iowa. “After he’s gone and Grace is in a museum, we’ve got to start and pick up where he left off,” Sheriff said. Anderson, a designer and car fanatic from Urbandale, agrees. After Grace is repaired and on her way, he said, kids in Iowa will still be sick. Families will still need to be inspired Old, classic cars like Grace have a soul, Anderson said. They work when they shouldn’t and at just the right times, he said, even when it seems to defy physics. Anderson is restoring an old 1965 Triumph TR-41 for the effort. “We said let’s have each state have a Grace,” Anderson said. “And that will be Iowa’s version of Grace.” 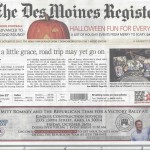 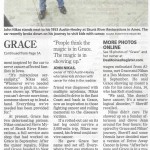