The fellow Ames natives and Iowa State University grads merged their respective worlds of caffeine and gasoline to create what might be Iowa’s first custom coffee truck.

Andrew Burgason, the coffee nerd, can wax poetic for hours about the “flesh” of the coffee bean, the “first crack” of a roast and the complicated ethics of buying from coffee farmers around the globe.

He first learned to roast at age 11 on a trip to Idaho with his dad, Steve, who founded the Ames coffee company Burgie’s and opened the family’s first shop in 1990.

Burgason, 28, as operations manager now begins roasting at 4 a.m. two or three days a week at his family’s facility on the far west side of Ames.

Meanwhile, the car nerd, Steve Myers, saves his reverence for the molded metal of European — particularly British — sports cars. He talks about the first Austin-Healey he dismantled like it was a religious epiphany.

Myers, 35, probably has driven or owned more European sports cars than the number of coffee beans currently stowed in your kitchen cupboard.

“Girls always say that they have a different shoe for every occasion,” he smiled amid the hundreds of thousands of dollars of sporty, shiny treasures parked and stacked on giant shelves at his Skunk River Restorations in Ames.

His dad, Al, was an amateur road racer before Myers was born. The son now regularly pulls his own double-decker car trailer to National Auto Sport Association races in Colorado, Georgia and elsewhere.

So you see that both these guys have been shaped by the passions of their fathers.

Myers’ auto garage also is situated just down the street from the Burgie’s coffeeshop inside the Conoco station next to Lowe’s, just south of U.S. Highway 30.

It was a couple years ago when Burgason’s father, driving by daily, took notice of the vintage 1954 International Metro van emblazoned with the Skunk River Restorations logo that Myers had parked outside as a temporary business sign.

The Burgasons were in the market for just such a stylish retro van with which to create their own coffee truck to roll around and hawk their java and tea on the streets.

The family had resolved to “make some drastic changes just to stay relevant” in the coffee industry, Burgason explained.

Turns out we’re in the “third wave” of coffee culture, he educated me, a back-to-basics movement that sounds not entirely unlike late-1970s punk rock that rose to defy the frills of arena and progressive rock.

Coffeetruck4
The Burgie’s coffee truck as it appears mid-restoration at Skunk River Restorations in Ames. (Photo: Special to The Register )
The first coffee wave more or less spans from the Boston Tea Party to the Folgers era.

Starbucks and its ilk triggered the second tidal wave, creating a booming upscale market where there had been virtually none.

But with that retail explosion came such sugary, syrupy monsters as the pumpkin spice latte. And coffee taste was dumbed down to the simple notion of a spectrum from a “light” to “dark” roast.

Burgason is more of a purist, “focusing back on the origins” and distinct flavor of each coffee variety.

So a coffee truck became a means to deliver his family’s refocused, refined message — simultaneously plugging into the increasing popularity of urban food trucks.

Burgie’s already had a conventional Nissan van to deliver its wholesale beans, but that wouldn’t do.

So the family found two junked 1958 Grumman Olson trucks on eBay that had been used to haul pianos and furniture by Barnes Moving in Martha’s Vineyard and paid $3,500 for the pair.

They wanted roominess: Burgason, 6 feet 3 inches tall, can just about stand up comfortably inside the aluminum frame. (His younger brother, a basketball player who also has joined the family business, Jordan, 24, stands about an inch taller.)

Then they turned to Myers to help engineer a $70,000 conversion that involved more than cutting a hole in the side and attaching a counter.

If this was a James Bond movie, Myers would be Q with all the gadgets. It’s an appropriate metaphor: The mechanic also owns a $100,000 blue 1966 Sunbeam Tiger, the same make that Sean Connery drove in the first Bond film, “Dr. No.”

And if this was “Breaking Bad,” Walter White might be impressed with how Myers devised a system of batteries so that the Burgasons could park and churn out cup after cup from their 240-volt espresso machine without the annoying drone of a gas generator.

Customizing school buses have been yet another Myers specialty for years. Just check out the skoolie.net forum he created 11 years ago, where tens of thousands of bus and RV nuts worldwide still swap tips. The first bus Myers ever converted, a 1972 International, remains parked in his garage. For that he used secondhand batteries that had been part of the backup power supply at Hilton Coliseum.

The Burgie’s coffee truck is due to debut later this month. Andrew Burgason has been navigating the proper state inspections and city permits to operate in Story and Polk counties.

Ames has issued permits to food carts but no roving food (let alone coffee) trucks, according the deputy city clerk.

Des Moines, however, now has 20 permanent food trucks, and the city continues to wrangle with whether to tweak rules to allow curbside and late-night sales.

Nationally, even Starbucks has been testing its own coffee trucks on college campuses.

But for Burgason, ultimately this is more personal than trendy. “Coffee’s been there for some of the hardest times in their lives,” he said of the connoisseur’s relationship with his or her morning cup.

As a kid, it was the ice cream truck that thrilled me. But as a sleep-deprived adult, I have to admit that it’s the coffee truck I’m likelier to chase down the street. 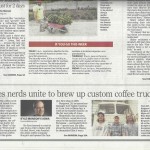 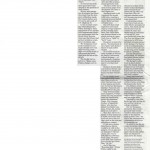